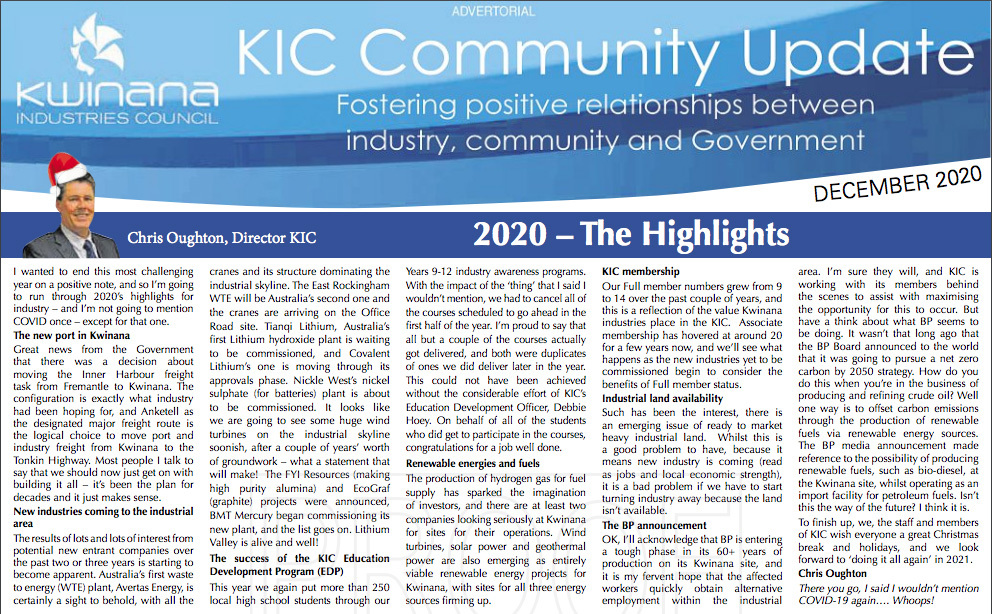 I wanted to end this most challenging year on a positive note, and so I’m going to run through 2020’s highlights for industry – and I’m not going to mention COVID once – except for that one.

The new port in Kwinana
Great news from the Government that there was a decision about moving the Inner Harbour freight task from Fremantle to Kwinana. The configuration is exactly what industry had been hoping for, and Anketell as the designated major freight route is the logical choice to move port and industry freight from Kwinana to the Tonkin Highway. Most people I talk to say that we should now just get on with building it all – it’s been the plan for decades and it just makes sense.

New industries coming to the industrial area
The results of lots and lots of interest from potential new entrant companies over the past two or three years is starting to become apparent. Australia’s first waste to energy (WTE) plant, Avertas Energy, is certainly a sight to behold, with all the cranes and its structure dominating the industrial skyline. The East Rockingham WTE will be Australia’s second one and the cranes are arriving on the Office Road site. Tianqi Lithium, Australia’s first Lithium hydroxide plant is waiting to be commissioned, and Covalent Lithium’s one is moving through its approvals phase. Nickle West’s nickel sulphate (for batteries) plant is about to be commissioned. It looks like we are going to see some huge wind turbines on the industrial skyline soonish, after a couple of years’ worth of groundwork – what a statement that will make! The FYI Resources (making high purity alumina) and EcoGraf (graphite) projects were announced, BMT Mercury began commissioning its new plant, and the list goes on. Lithium Valley is alive and well!

The success of the KIC Education Development Program (EDP)
This year we again put more than 250 local high school students through our Years 9-12 industry awareness programs. With the impact of the ‘thing’ that I said I wouldn’t mention, we had to cancel all of the courses scheduled to go ahead in the first half of the year. I’m proud to say that all but a couple of the courses actually got delivered, and both were duplicates of ones we did deliver later in the year. This could not have been achieved without the considerable effort of KIC’s Education Development Officer, Debbie Hoey. On behalf of all of the students who did get to participate in the courses, congratulations for a job well done.

Renewable energies and fuels
The production of hydrogen gas for fuel supply has sparked the imagination of investors, and there are at least two companies looking seriously at Kwinana for sites for their operations. Wind turbines, solar power and geothermal power are also emerging as entirely viable renewable energy projects for Kwinana, with sites for all three energy sources firming up.

KIC membership
Our Full member numbers grew from 9 to 14 over the past couple of years, and this is a reflection of the value Kwinana industries place in the KIC. Associate membership has hovered at around 20 for a few years now, and we’ll see what happens as the new industries yet to be commissioned begin to consider the benefits of Full member status.

Industrial land availability
Such has been the interest, there is an emerging issue of ready to market heavy industrial land. Whilst this is a good problem to have, because it means new industry is coming (read as jobs and local economic strength), it is a bad problem if we have to start turning industry away because the land isn’t available.

The BP announcement
OK, I’ll acknowledge that BP is entering a tough phase in its 60+ years of production on its Kwinana site, and it is my fervent hope that the affected workers quickly obtain alternative employment within the industrial area. I’m sure they will, and KIC is working with its members behind the scenes to assist with maximising the opportunity for this to occur. But have a think about what BP seems to be doing. It wasn’t that long ago that the BP Board announced to the world that it was going to pursue a net zero carbon by 2050 strategy. How do you do this when you’re in the business of producing and refining crude oil? Well one way is to offset carbon emissions through the production of renewable fuels via renewable energy sources. The BP media announcement made reference to the possibility of producing renewable fuels, such as bio-diesel, at the Kwinana site, whilst operating as an import facility for petroleum fuels. Isn’t this the way of the future? I think it is.

To finish up, we, the staff and members of KIC wish everyone a great Christmas break and holidays, and we look forward to ‘doing it all again’ in 2021.

There you go, I said I wouldn’t mention COVID-19 again…. Whoops!