Coffee with the Roger Cook and the KIC 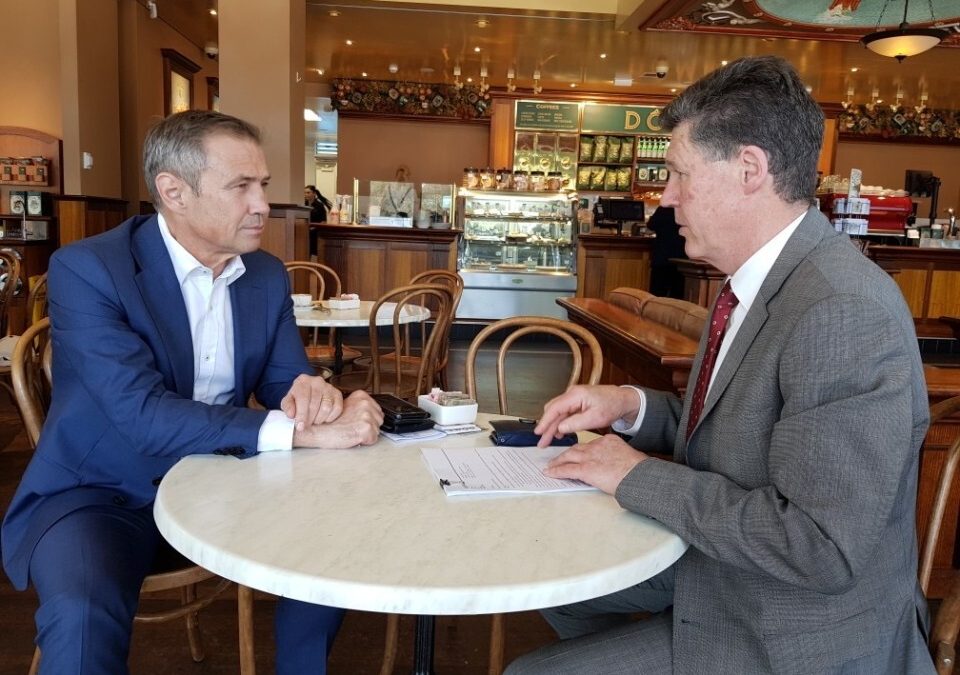 Just over three years ago in May 2017, KIC director Chris Oughton sat down with newly appointed WA Deputy Premier and Member for Kwinana Roger Cook for a wide-ranging conversation.

The discussion was reported in the Sound Telegraph then, with another meeting between the two men held recently.

In 2017, with the newly elected McGowan Government taking to office, the focus was on delivering election promises – one of which was a commitment to delivering an Outer Harbour or port in Kwinana.

Fast forward to today and the time of the pair’s latest meeting was ideal – the State Government have earlier this month backed the Outer Harbour project after an extensive review process by the Westport Taskforce, chaired by Nicole Lockwood. 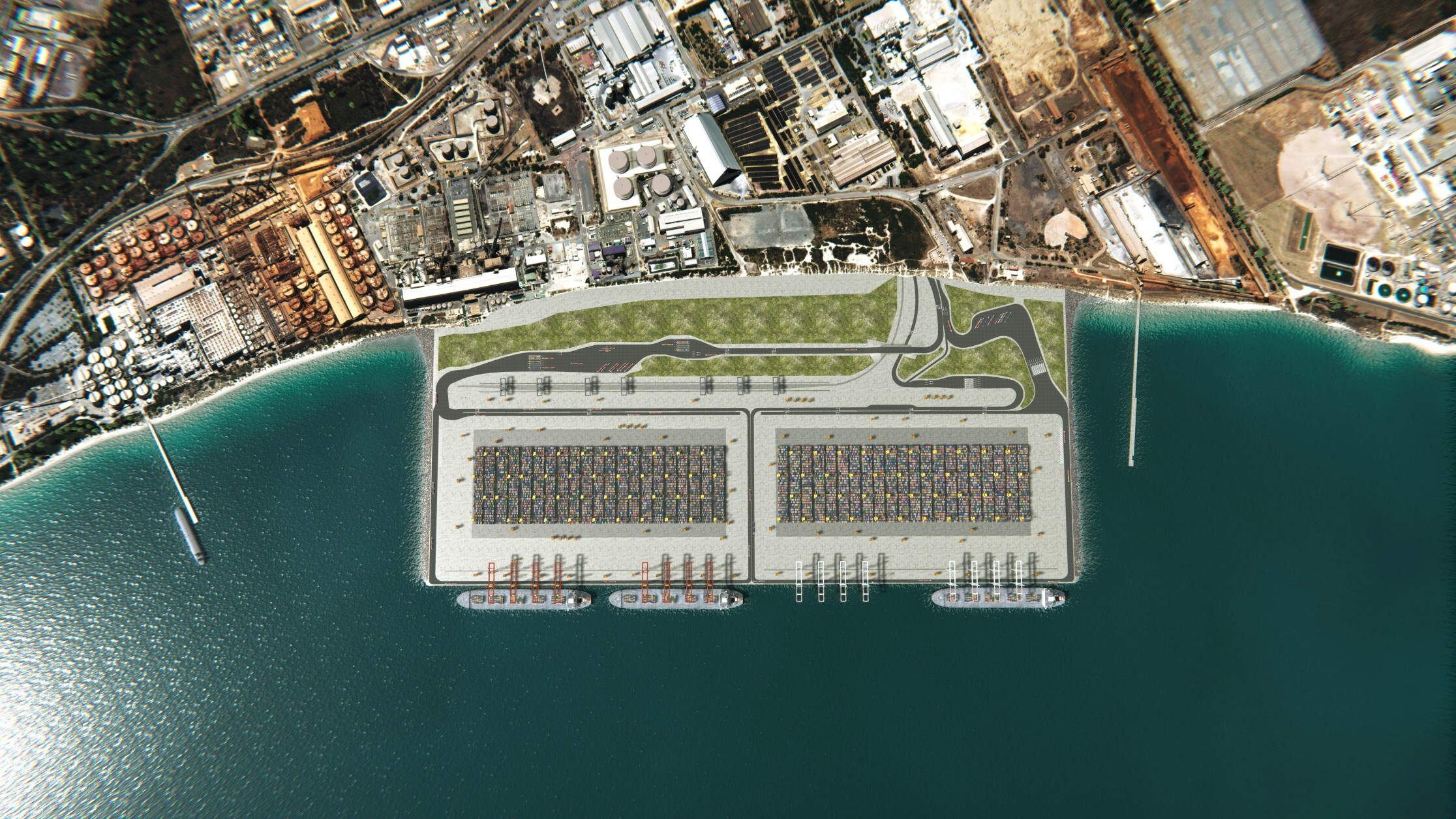 Mr Cook said the port development in Kwinana would be a major driver of the State economy.

“We would have liked things to happen a bit earlier – but when you are building a once-in-a-generation piece of transport infrastructure, you’ve got to do it properly,” he said.

“This is all happening in the context of COVID-19 and the government sees the opportunity it presents to really reposition the Western Australian economy. The Kwinana Industrial Area is essential to that.”

Mr Cook admitted that over the consultation period, leading politicians and public servants have had their eyes opened to the massive opportunity of a new port in Kwinana.

“I think there is a real consciousness inside government now that the industrial area represents a significant economic asset that we now need to take advantage of,” he said.

“That perhaps wasn’t truly appreciated before

“What’s been very gratifying has been to see some of my colleagues turn – I don’t mean they were opposed previously. Now, they really see the opportunities.”

Mr Oughton has played a sizeable part in educating government officials and elected members of the role the Kwinana Industrial Area plays in the State economy – so much so, that he has undertaken more than 220 tours of the precinct in the three years since the last article was published.

“It is such a change from those years ago where the attitude seemed to be ‘well, it’s quietly just doing what it’s doing, so let’s leave it alone and focus our efforts elsewhere’,” he said.

“A new port will be the trigger for getting so many of the industrial area’s existing infrastructure constraints fixed – that’s the primary reason that we are so excited about the announcement.”

“Yes, there will be some reduction in operational costs, and that’s good for their international competitiveness, but the big one really is about getting the constraints sorted out as a result.”

Mr Oughton said 30,000 people worked in the Kwinana Industrial Area and two-thirds of those lived within 15kms of their workplaces. He stated a new port would super-charge the local and State economy, while increasing job numbers further. “There will be new industries coming as a result of this port decision, and this has already started with the arrival of Lithium and renewable industrial interest,” Mr Oughton said.

“There’s so much going on already and when we get the port, that will be the international trigger for more interest to arrive here.”

Given the deeper water in the Cockburn Sound compared to the Fremantle equivalent and the others on the east coast, larger Panamax vessels will be able to use the new facility – creating an international-caliber facility, and subsequently boosting trade revenue and job numbers.

“The more capacity we have to move freight in and out efficiently, the more interested industry will be in coming and being part of the hinterland industrial area,” he said

“And with respect to the environment of Cockburn Sound the new port is hard up against the industrial coastline in an area that is already operating as a port where there is no seagrass, and it will occupy only a minute additional fraction of the Sound.”

Mr Cook said the next four-to-five years would be critical in making the project a reality.

“Let’s hope we win the next election – then we’ve got another four years of deep, ingrained development and project progress,” he said.

“The more you get down that path, the more you lock these things in and the more they are protected from the bumps and scrapes of the political process.”

Mr Oughton said he was encouraged by the State Government securing the Anketell Road corridor for enhanced transport options, but would like to see the process of establishing the port moving quicker.

“I do see the risk in this – I’ve been associated with port development now since I was a manager at the City of Fremantle in 1992,” he said.

“This is the third time I’ve seen us at this point and each of the other times something political has happened and we’re back to square one. But, this time around, we’re much more advanced and there is more structure around the business case.”

Mr Cook said ensuring new industrial land in the Kwinana Industrial Area was ‘shovel-ready’, such as at Latitude 32, would speed up the process and was a recent focus of government.

“I think the development of Latitude 32 remains an important project that needs to be pushed – it’s been idle for too long, but it is really a complicated policy and development piece,” he said.

“What Westport has done is consolidated a lot of those policy questions and allowed them a forum for them to be answered. From that perspective, it is a great time for the port development.”

Mr Oughton said a new development model around Latitude 32 could help get it going.

“I actually think it is too complex for the current system of governance – there’s too many heads on the dragon – it needs a different approach,” he said.

Both men agreed that Federal funding could play a major role in speeding up the port development.

Mr Oughton revealed executive chairman of the National COVID-19 Co-ordination Commission Nev Power would be taking the KIC tour of the industrial area in the very near future, while the Committee for Perth’s report – Kwinana: A Catalyst for Economic Development, and the Regional Development Australia (Perth) soon to be released Strategic Plan for the WTC – could drive federal investment.

Rounding out the conversation, Mr Cook said it was no longer a matter of if the port would happen, but when.

“Doing nothing is not an option – you cannot just sit on your hands and think the Fremantle port will tick over and everyone will be satisfied with stasis,” he said.

“They won’t. You need to take the community and the economy forward.

“Usually you listen to your State Government colleagues and maybe think ‘well that’s another drain on the budget’ – but with Westport they now see it not as something that needs to be done, but something we want to do.

“It’s going to be an important part of who we are as an economy in the future and that’s really exciting.”